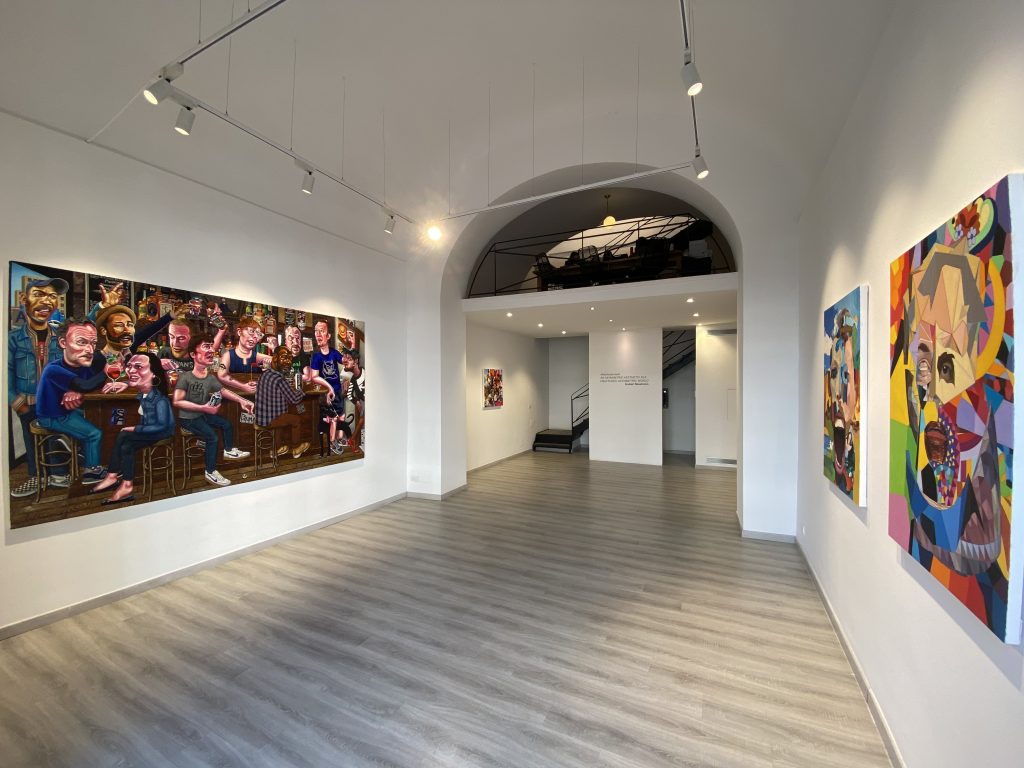 Mucciaccia Contemporary presents the second chapter of a long lasting exhibiting project started in 2019. Through yearly duo exhibitions the wants to talk about the interational artists who, despite belonging to different generations, share a common view over the current world, which the well-known American collector Hubert Newman calls Aftermodernism.

In this second chapter, the artists Benjamin Edwards (Iowa City, IA, USA, 1970) and Tom Sanford (Bronxville, NY, USA,1975) are presenting twenty artworks circa commissioned for this show. Through the artworks we have their personal view of our current society in general and specifically of the idea of city, on the heels of Hubert Newmann’s thought, which, as Cesare Biasini Selvaggi explains: “He thinks that the best art produced nowadays is the one reflecting the cacophony, the asymmetry and the vagueness of the current society”.

On the artists regards Neumann says: “I bought the first works by Tom Sanford on February 8th 2004, while the ones by Ben Edwards on December 10th 1999, barely five years one from the other. I got to know their works from several galleries which no longer exist. I developed a personal relationship with them both, still perduring 20 years later. We kept in touch quite consistently in the meantime. […] They are both exploring realism, but in quite different ways. They both have invented new aftermodernist spaces, and they maintained a continuous development, even if scattered and unpredictable.”.

Hubert Newmann is a youthful 90 years old collector, passion which he inherited from his father, who at the beginning of the 20th century in Paris used to frequent young and at the time unknown artists such as Picasso, Dubuffet, Miró, Giacometti, Gris, Braque, and Léger. Indeed, Hubert starts to buy the first artworks with his father in 1950s New York City, being attracted by artists not yet understood by the wide public such as Franz Kline and Alberto Giacometti.

Nowdays, he possesses a collection of more than 2600 works, upon which masterpieces from the most important artistic movements such as Cubism, European Abstract Art, Avant-garde Sculpture, American Abstract Expressionism, Pop Art and Graffiti, and some of the most renewed artists of the 20th century, such as Picasso, Léger, Miró, Kandinsky, Kline, Giacometti, Dubuffet, Rauschenberg, Lichtenstein, Haring, and Basquiat, just for mentioning some of them.

Namely Hubert at the beginning of 1980s started collecting art with works by Koons, and in such works he detects for the first time the concept of ‘open’ non-modernist artwork. He sensed the changing point the artworld reached after the rising of Basquiat and Haring: the new philosophy and artistic language is characterized by a deep rupture with the modernist aesthetic.

The curator, Cesare Biasini Selvaggi, says: “The more he deepened his philosophical, mathematical and scientific knowledge, the more he had clearly in mind that the rupture he felt is deeper and with much drastic and wide consequences than he initially supposed. And I think that in this sentence is manifest Neumann’s curatorial inclination, and his proverbial intuition in choosing the contemporary artists to collect from, all characterized by the fracture with the modernist aesthetic”.

Between October 2007 and January 2008, a collective show curated by Naumann, The incomplete, is on show at the Chelsea Art Museum at New York City, with an exposition projects which continued in Paris in 2010 at the Jean-Luc and Takako Richard Gallery. The title “The Incomplete” does not fully convince Neumann, and thus he starts using the term “Aftermodernism”, which officially ‘debuts’ in 2013, during the first episode of a trilogy of exhibitions held at the Nassau County Museum of Art at Roslyn Harbor, NY.

“It has always been this innate intuition of understanding in which direction the Zeitgeist – the spirit of time – blew, to inspire his acquisitions and his father’s in the past.” Continues Biasini Selvaggi “And is the same on which Hubert Neumann relied in the last thirty years in choosing the contemporary artists to collect. In this case the Zeitgeist incarnated the name Aftermodernism.”. The artists in this exhibition are namely giving back in their art the spirit of time.

AMERICA OGGI
(America Today)
Documentary Discover the artistic movement Aftermodernism together with the director of Mucciaccia Contemporary, Giulia Abate, and the curator Cesare Biasini Selvaggi.Artists Benjamin Edwards and Tom Sanford give their interpretation of the artworks contextualized in the period of transition that America lives today.
With Giulia Abate and Cesare Biasini Selvaggi Directed by Giuliana Gamba, edited by Roberto Mazzarelli

Ben Edwards’ research is a continuous investigation of the dynamic relationship between progress and nature, attempting to understand their balance and laws. From this philosophy originates the shape of his imaginary cities, where the human figure has a marginal role and is only limited to a theory of portraits not easily identifiable. With his philosophy Edwards wants to express his concept of Utopia, that is “a work which has validity in itself and overcomes the artist in the sense that it tascends not only the time and the physical life of the artist, but also conceptually, since it constantly reborn through every new interpretation.”, as explains Biasini Selvaggi in the catalogue.

Tom Sanford’s paintings instead, come from multiple influences starting from Renaissance, continuing with the 1800s, Surrealism and Pop Art, up to the advertising and the comics from nowadays. His artworks range from still lives to genre paintings: “His human figures show a huge variety of humans, with the villains and the victims, the tragedies and the triumphs of each moment. In his still lives he is more focused on the images rather than on the portrayal,” as Biasini Selvaggi Explains “and therefore the image prevails on the object portrayed, since it is still, and more or less identical to itself, without any feeling or abstract shape.”. Sanford unites a high and a low register, using an essentially post-modern painting style, taking inspiration from the History of Art reinterpreted following nowadays taste.

Through the works by Edwards and Sanford the exhibition is willing to promote one of the most unique and eclectic figures of the current artworld worldwide, namely Hubert Numann, continuing the Aftermodernism project in Italy. The catalogue, curated by Cesare Biasini Selvaggi and edited by Carlo Cambi Editore, is the second chapter of a series dedicated to the Aftermodernism.

Benjamin Edwards, born in 1970 in Iowa City, Iowa, and now he lives and works in Washington D.C. He exhibited in the USA, in Europe and in Asia. His works are in prestigious museum collections such as the Carnegie Museum of Art, Pittsburgh, Pa and the Museum of Modern Art, New York City, NY.

Tom Sanford, born in 1975 in Bronxville, NY. He obtained a BA at the Columbia University, and an MFA at the Hunter College. His works are in museums and galleries all around the globe, and he had solo exhibitions in galleries such Gallery Poulsen (Copenhagen), Kravets Wehby Gallery (NYC), Galleri SE (Bergen), Gitler & ___ (NYC), Leo Koenig Inc. (NYC), Galleri Faurschou (Copenhagen), BravinLee Programs (NYC), and Gallery ZIdane (Lussemburgo) among the others, and in numerous collective exhibitions.

Benjamin Edwards
Edwards has employed many techniques over the years to further embrace the unexpected and allow it to harmoniously exist alongside that which might be diﬀerent. At ﬁrst he used a slide projector, shifting or layering images, to achieve unforeseen combinations of imagery, to then paint. In 2005, he took this process a step further and began using a JavaScript embedded HTML code in combination with a digital projector.[…] 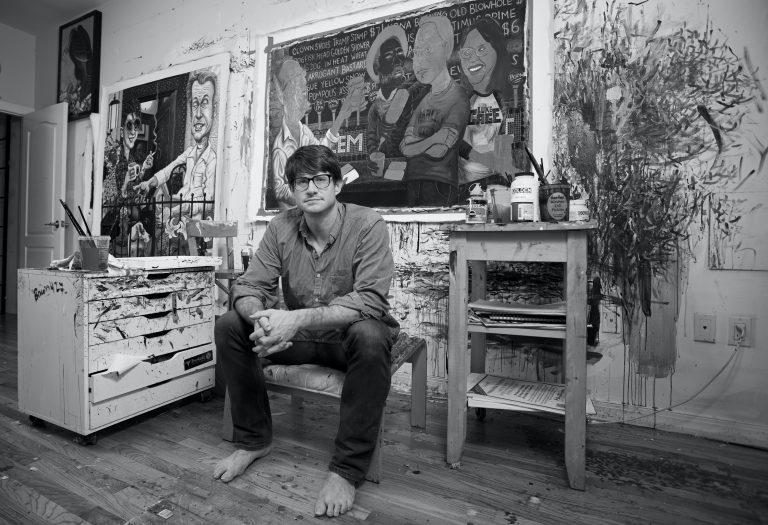