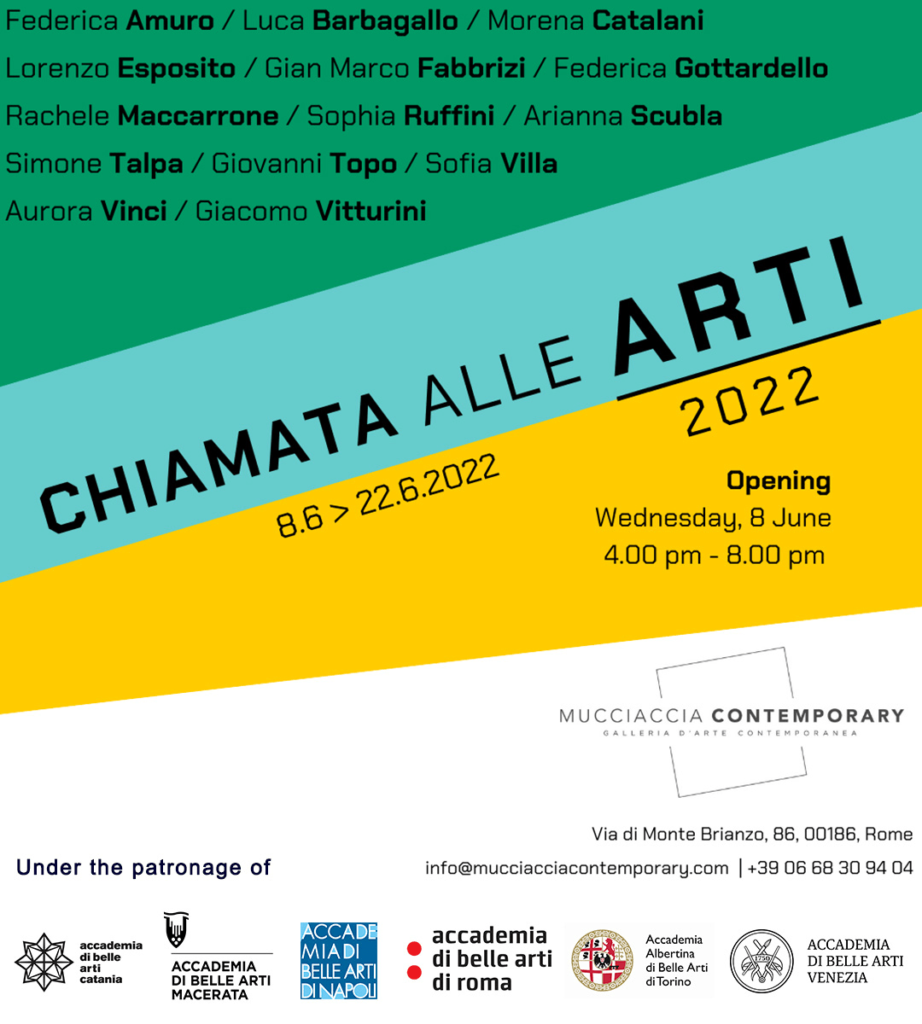 Mucciaccia Contemporary is pleased to present the group exhibition Chiamata alle Arti | 2022, a project launched in 2021 that aims to support the Italian Academies of Fine Arts throughout the country and offer visibility to the students and their artistic creativity.

The Academies of Fine Arts participating this year are Catania, Macerata, Naples, Rome, Albertina in Turin and Venice. The selection process is based on linguistic diversity, characterized by a profound research which can be traced back to the student’s own experiences and lessons of artistic practice. Thus, the exhibition intends to give voice to the complexity of contemporary creativity, while also offering important insights into the current state of art in the various Academic Institutions. Precisely in this sense, the exhibition aims to be a vision, by no means exhaustive, of the emergent state of art that coincides with a common feeling that has a predilection for the beauty of art. The gallery becomes a means of creating ties with the young generation, to the point of prefiguring itself, without any pre-established rules, as an opportunity for the development of artistic models.

The exhibition will be accompanied by a catalog published by Mucciaccia Contemporary Edizioni. Students from a few of the participating academies will be present on the opening day.

Federica Amuro’s work investigates the human kind and their encounter-clash with the time and space in which they carry out their existence. The works on display are an invitation to resynchronise with the natural environment, its incessant cycle and also to rediscover one’s own human condition reflected in quiet and surreal environments.

Barbagallo’s painting is characterised by strong colors to suggest that under the veil of shapes and colors there is something waiting to be interpreted. The works on display are an encounter with city views that brings him to experiment with techniques, such as acrylic colour drippings.

Morena Catalani’s photographic technique is the result of a fragmented gaze. Focusing on the study of the human body, the vision is divided into individual parts. When seen together, these portions narrate the uncertainty of the body, especially of the skin.

Lorenzo Esposito exhibits two artworks from the series entitled Aniconic Metaphysics, conceived as an experimental approach that embraces painting techniques hybridised by the use of plaster. The forms in the works are free and anti-figurative, a test that leads the student to agree on the triumph of form.

Fabbrizi’s painting derives from a profound reflection on mass society and historical-social  facts drawn from contemporary history. Although the themes explore profound questions on the human existence, he approaches them with a light spirit, an expressive vein drawn from the comic style.

Federica Gottardello’s practice is characterised by the use of fabrics, textiles and cotton threads that take shape in site-specific and small to medium-sized works. Starting from a reflection on existential issues and the mutual relationship between man and nature, every thread represents a symptom of an emotional tension.

The body, and its innate sensuality, is the protagonist in Maccarrone’s work. Her choice of medium is fundamental, and includes fabric inserts and applications of extra-pictorial materials. With such tactility and material sensuality, she intends to awaken the dormant  senses in the viewer.

Sophia Ruffini turns to her own body and from it she builds bodily parts with cotton threads. Among the organs on display, the brain and the heart are strangely represented through intertwining threads aimed at representing the complexity of our thinking and feeling.

The existence of Man on earth is at the centre of Arianna Scubla’s work. Using painting as a method of investigation, she treats the canvas as a space for meditation and interior writing, resulting in a worn surface that recalls a mural stratigraphy.

Space is the protagonist of Simone Talpa’s works, conceived as a clash of opposing entities: lines and geometric forms, figurative and abstract, the intangibility of emptiness and the density of fullness. Figures alternate with a freedom of the line that opposes the rigidity of geometry, translating the eternal struggle between stable forms and the fluidity of the flow of things.

The works on display belong to the series created between 2019 and 2020 in which Giovanni Topo experimented with photographic techniques which were then transposed onto paintings. Human figures emerge completely dematerialised, sublimated in a white light, with an evanescent consistency, like intangible creatures wandering in a natural context and passing through to obstruct the vision of a landscape.

Sofia Villa focuses on spatial fragments that describe an ordinary intimacy. The works are characterised by poetic projections, as the painting on display of a bather immersed in pale green water, between pink banks and accompanying goldfish, an indefinite figure one can identify with.

Aurora Vinci’s research focuses on landscape, places of natural periphery. Her gaze rests on the vast extensions of cultivated fields, as well as on nature’s countless iridescent colors. Through a meticulous technique consisting of veils of colors, she creates a painting from which shadows of natural elements emerge.

Giacomo Vitturini’s research focuses on the psychic phenomena that characterize perception and being in the world. The pictorial language is surreal, ambiguous and full of iconographic and symbolic codes of mythological, Christian and Renaissance inspiration. At the heart of his work is the practice of drawing, with the use of charcoal and powdered pigments, on poplar boards.