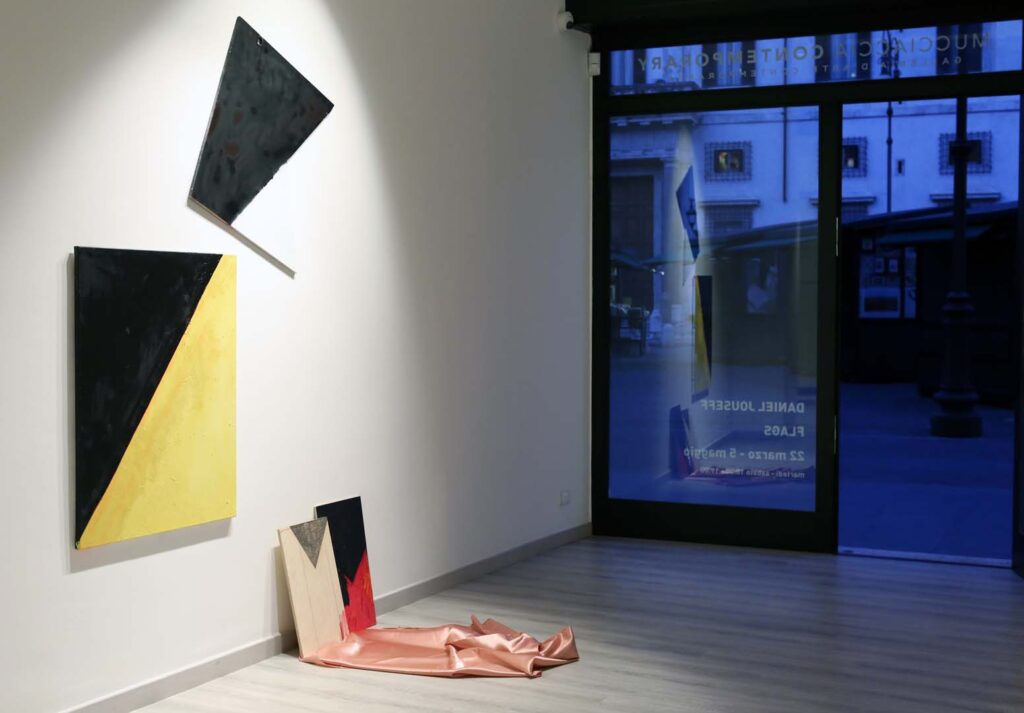 What does it mean to belong? My whole life has been a search for identity. Who am I, where am I from? I was born and raised in one country but my heritage is from another.

Mucciaccia Contemporary inaugurates Daniel Jouseff’s first solo show in Italy, on Thursday 22 March 2018, at 6.30pm. The artist, of Palestinian parents, was born in Sweden in 1975, where he currently lives and works.

The exhibition, curated by Louise Hamilton, will include 25 recently created works on canvas, paper and textiles. The works reveal the artist’s reflection on themes of origin and cultural belonging.

For Daniel Jouseff, his work represents a journey, a personal story, where the theme of identity research is the leitmotiv of all his oeuvre.

His research is linked to his own life: son of parents of Palestine origin, who later moved to Sweden. Jouseff feels the importance of his cultural heritage to the point of bringing it with him and continually interweaving it in his works.

«Crossing a border – Daniel Jouseff explains- is full of events and impressions. Show your passport, seeing a flag, crossing that physical border, from one home to another. You become aware the same land can be divided by a line giving the two sides their own identity. Sometimes as friends and other times as enemies. »

In addition to his reflection on identity research and geographical transience, Jouseff is also interested in social rules. Here his drawings and canvases are created freely and instinctively, in which its poetry without rules, express the desire not to submit to any artistic subordination.

The exhibition is displayed on the two floors of the gallery: the works that express the determination to tell the passage of a border and a territory will be exhibited. On the ground floor, whilst on the upper floor a site-specific installation will be created which centers on the forma mentis of the artist. On both floors, the theme of the flag, being the result of a continuous and complex process, is addressed. His artistic production has developed around this subject-matter, and has lead him to a careful interpretation of themes of origin and belonging.

The show will be accompanied by a bilingual catalog published by Carlo Cambi editore with an essay by the curator and an unpublished cover specially made by the artist.

Daniel Jouseff was born in Växjö, Sweden in 1975 and moved to Stockholm from August 2003 where he currently lives and works. His artistic research begins with the great masters of the XX century such as Pablo Picasso, Martin Kippenberger and Sigmar Polke. The artist has participated in several exhibitions, including: Transition held in 2016 in Lydmar, Stockholm and Flags organized at Studio Rei in 2017. In the same year he participated to the shows, Sah A-Nom / Good Morning at the Konstnärsbaren in Stockholm and Flaggor över gränserna / Flags over borders at the Bar Brillo of the same city. He took part in the group exhibition Kaplan Art Expo, and finally in 2017 he exhibited at the international art fair, Pop Austin International Art Show in Texas.