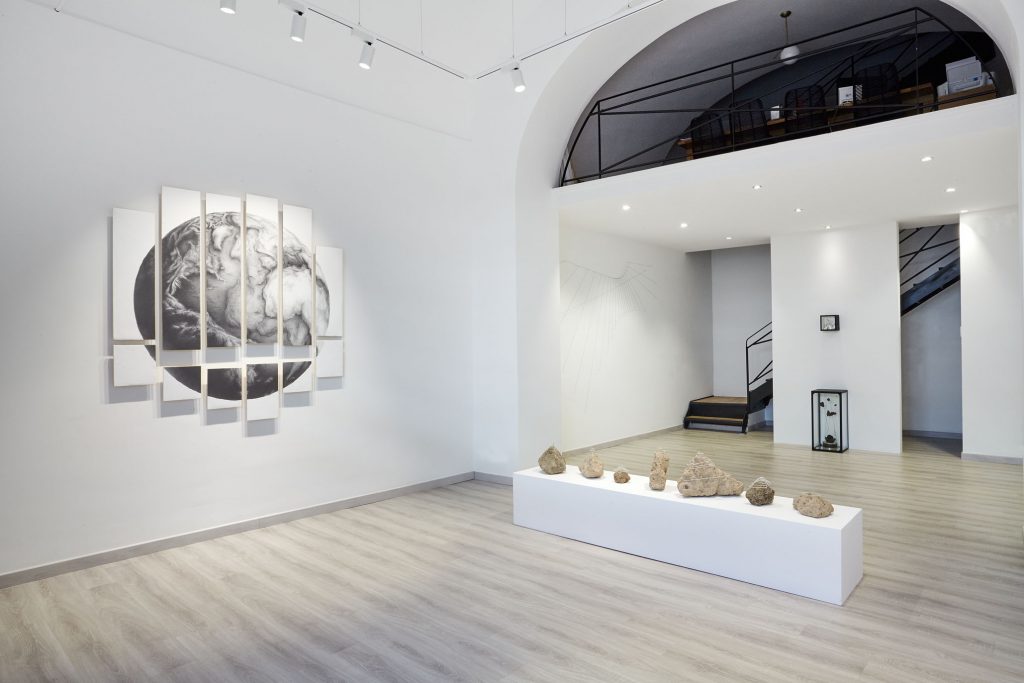 As the curator says “It strikes the contrast between the young age and the brilliant reflection on philosophically complex issues, ambitious for theoretical instances and creative process. Nicole Voltan observes the macro size of the existing one to then produce branched analysis, following an aesthetic of rare beauty and adherence to the Planet, along heterogeneous solutions that show discipline, meticulous talent, physical control of the method, visionary sublimation.”

The link between the project and the space is found already within the title: a two-level gallery, the ground floor and a first floor, to welcome a reflection between EARTH and SKY, a show divided by location but deeply united: sky above and earth below, impalpable and physical, dynamism and static, macro and micro, future and past …

Nicole Voltan imagines very distant spaces, counts time on the table of billions of years, faces up to the mineralization of matter and the fossil tension of the universe. Her thoughts have no connection to the present, but a perspective that evolves toward the primordial origin and the cosmogonic future.

EARTH Floor: Here she presents heterogeneous works for materials and composition, each with its own internal narrative, as if the works become a small theater of vision that gives us the unexpected and surprising. The works manipulate materials such as lava, tufa, iron, but also fabrics, cotton and light are involved in the creation of its sculptural objects. The materials give a synthetic form to a visionary thought, they adapt to the design code of the artist, so as to become narrative subjects accomplished, a kind of autonomous planets with their endogenous life. An example is the work entitled In 2,000,000.001, in which a meticulous graphite design on separate bands is seen, the state of the planet between two billion years, the subject of sea change, tectonic movements and displacements of continental plaques.

SKY Floor: A work on the ceiling perfectly defines the narrative state of the section. There are 759 needles that form the 88 constellations of our sky, offering us a bumper and attractive texture, in perfect harmony with the vitality of a universe that is perpetual destruction and regeneration. Here too the various works define a scientific conduction that is mixed with literature, alchemical mythologies, esotericism, legends and every possible conscious analysis of the universe.

The exhibition is accompanied by an illustrated bilingual catalogue (Italian-English, Carlo Cambi Editore), with essays by Gianluca Marziani and Maurizio Savini.

Nicole Voltan was born in Mestre (Venice) in 1984. She studied at the Academy of Fine Arts in Venice. Her first personal exhibition entitled Nel segreto di una valigia was held in Milan in 2007 at the Cultural Circle Bertold Brecht. Later, in 2011, she showed in Rome with the exhibition Sistema Entropia at the Whitecubealpigneto Gallery, now La Stellina Arte Contemporanea, in the context of the X Festival of Photography promoted by the MACRO Museum of Rome. In 2013, at La Stellina Arte Contemporanea, she holds her second solo exhibition entitled 88 Trame. More recently, in October 2016, she attended the Rome Art Week event, with the exhibition Exalt the Past Survive the Future, held at her studio in the Pigneto district in Rome. Among her group exhibitions are Art more business like Love at Mole Vanvitelliana in Ancona and Intreccio at Rocca di Umbertide in Perugia, both held in 2017. She also participates in Gas Stelle e led: José Angelino and Nicole Voltan, held at the New Era Museum in Bari in 2014. She has realised two permanent installations, Muri Dipinti, near Gavazzana in the Province of Alessandria and Dare senso ai luoghi, SAC Mari tra le mura, part of an artist residence programme at Mola di Bari, promoted by the Fondazione Pino Pascali.

Nicole’s works are the result of the strong relationship between art and science, which is expressed through different artistic techniques, used by the artist, such as painting, design, site-specific installation and sculpture. Her scientific aptitude is inspired by nature that is microscopically analysed and the detail is amplified through a profound methodological study. Nicole lives and works in Rome. 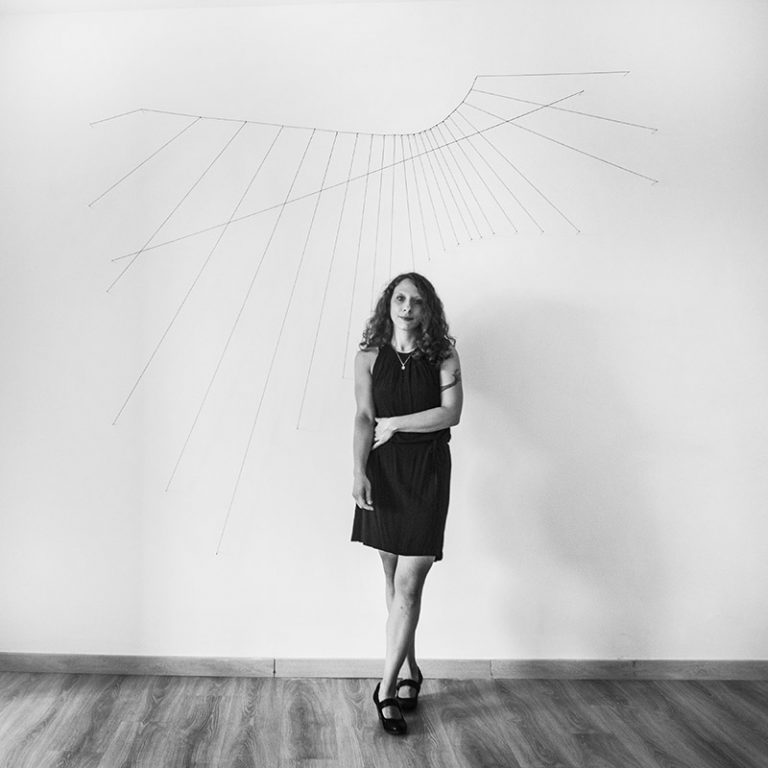 Nicole Voltan
Her works are the result of an intense dialogue between art and science, which find an outlet in the various artistic techniques she uses, such as painting, drawing, site-specific installation and sculpture. Nicole Voltan observes the macro dimensions, producing branched analyses, following an aesthetic of rarefied beauty, along heterogeneous solutions that include discipline, meticulous talent, physical control of the method and visionary sublimation. Her scientific aptitude is inspired by nature which is analyzed microscopically and whose detail is amplified through a profound methodological study.[…]